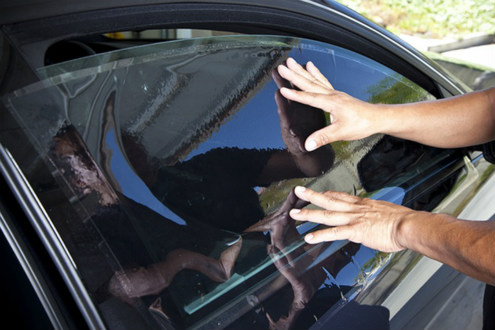 Window tinting typically refers to a process in which a transparent sheet of film is applied to the inside of a vehicle’s windows. The primary purpose of this process is to reduce the amount of heat and radiation from the sun that reaches the interior of the vehicle, but many folks just tint their windows because they think it looks cool. The thickness of the film and the material from which it is made can vary, and different states have different restrictions regarding the darkness of the film that may be used.

One of the main practical benefits of window tinting is the ability to prevent fading and damage to the car’s interior from the ultraviolet light exposure. Tinting can also help to keep the interior of a vehicle cool as well as reduce the glare produced by the headlights of other vehicles. In addition, deep tinting can enhance security and privacy as others cannot easily see what is in a vehicle. Not only is it more difficult to see possessions inside a vehicle but tinting also makes it easier to conceal occupants inside a vehicle. This is why window tinting is used commonly in limousines. However, if it is too dark, tinting can be dangerous when driving at night because it may reduce visible light transmission through vehicle windows. Because of safety concerns, the darkness of tinting on front windows, as opposed to tinting on back windows, is subject to regulation by the state, and each state government mandates its restrictions regarding the matter.

We are experience and qualified in car detailing. We only use the best products and processes to clean and protect your car.  We are on  call 7 days a week from 8am – 6pm